Amy Schumer has proven herself to be one of the entertainment industry’s leading forces as a standup comedian, actress, writer, producer and director. 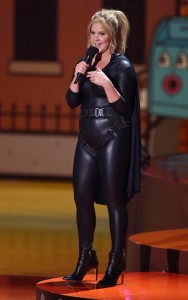 Schumer is the creator, star, writer and executive producer of the award winning “Inside Amy Schumer,” the popular Comedy Central television series, which premiered in April 2013 to the network’s highest season premiere ratings of that year. “Inside Amy Schumer” won the 2015 Writers Guild Award for Best Comedy/Variety Sketch series.

In 2015, the show was honored with the first-ever Primetime Emmy Award for Outstanding Sketch Variety Series.

Additionally, she was awarded the 2015 Critics’ Choice Television Award for Best Actress in a Comedy Series.

Among the show’s many accolades, it also received the prestigious Peabody Award in 2014.

Schumer’s first book, The Girl with The Lower Back Tattoo, continues to live on The New York Times bestseller list. Additionally, the book earned her a 2017 Grammy Award nomination for Best Spoken Word Album and was released in paperback in August.

Schumer was most recently seen on the big screen in Snatched, the mother-daughter comedy opposite Goldie Hawn. She can currently be seen in Jason Hall’s drama Thank You For Your Service and stars in the new comedy, I Feel Pretty, opposite Michelle Williams.

Additionally, she won the Critics’ Choice Award for Best Actress in a Comedy and was nominated for a Writers’ Guild Award in the category of Original Screenplay.

That same year, the British Academy of Film and Television (BAFTA) honored Schumer with The Charlie Chaplin Britannia Award for Excellence in Comedy.

Her one-hour HBO comedy special, “Amy Schumer: Live at the Apollo” directed by Chris Rock, premiered on October 17, 2015, and was HBO’s most watched Saturday night comedy special debut since December 2009.

She continues to tour to sold out shows around the world.

She made her network debut in 2007 when she starred on NBC’s “Last Comic Standing” and soon after co-starred on “30 Rock” and received her own Comedy Central Presents special.

Her other television credits include FX’s “Louie,” HBO’s “Girls” and “Curb Your Enthusiasm,” as well as Adult Swim’s “Delocated.” Her album Cutting placed in the top five of the Billboard charts and has been included on multiple Best Comedy Albums of the Year awards’ lists. This year Amy made her Broadway debut in Steve Martin’s Meteor Shower.

Schumer is a founding member of The Collective, a New York based Theatre Company, and a graduate of The William Esper studio where she studied for 3 years.