Hypnosis and ESP by Ronny

Whether he is performing as a mentalist or a hypnotist, Ronny takes audiences on an unforgettable journey into the human mind. He holds the audience spellbound first with his amazing demonstrations of mentalism and ESP, and then with his hilarious use of hypnosis. He’ll boggle your brain, making you wonder “How on earth does he do that?!?”

Names. Phone numbers. Social Security numbers. Important dates. Scholastic grades. Innermost thoughts only known to members of the audience. Ronny zeroes in on it all with amazing accuracy. 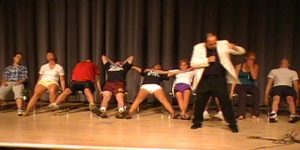 Ronny draws the audience into a side-splitting demonstration of what hypnotism – and the human mind – can do. Imagine watching your friend in a body building competition, speaking Martian, or becoming a prima ballerina or even an army drill sergeant right before your eyes!

When Ronny leaves the stage, he’ll leave the audience crying for more. And he’ll leave you saying this was your most successful event yet! Ronny’s 90% rebooking rate proves that!