Mark M is a professional magician who is fascinated by using magic to better understand how we see the world. In addition to performing at private and corporate events all over the world, and creating magic for film, television, the Broadway stage, and Cirque du Soleil, Mark tirelessly explores the theme of ‘Misdirection’ from an interdisciplinary standpoint. He regularly presents on ‘Perception’ at universities and conferences in North America and Europe, including the Association for the Scientific Study of Consciousness, and has lectured with the late Nobel laureate Dr. Gerald Edelman of The Neurosciences Institute. 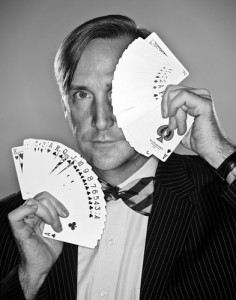 Mark was the apprentice to legendary sleight-of-hand master and vaudevillian Slydini, and a long-time student of Ozzie Malini – the son of turn-of-the-century magician Max Malini. He has performed for Mick Jagger, Beyoncé, Jay-Z, John Mayer, Katy Perry, Salman Rushdie, Sienna Miller, Mark Messier, Sting, Sylvester Stallone, and many others; at festivals in Europe and Asia; at the Olympic Games; in war-torn Liberia; in hospital wards around New York City; and in a Mexican orphanage with members of the band Guster. His magical hands are featured in a They Might Be Giants video, and he appears in Tony Oursler’s latest video project ‘Imponderable’, in which he plays both Oursler’s grandfather Fulton Oursler and Harry Houdini. 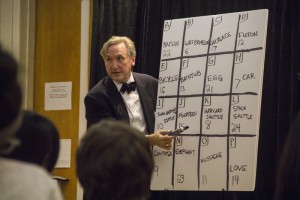