Michael Turco fell in love with the mystery of magic when he was just 5 years old. Spending his summers just miles from the strip in Atlantic City, Michael saw every magic show in the area and was intent to master each trick and illusion on his own. Turco knew it was just a matter of time before his name would be on the marquis of some of the most luxurious casinos in the world.

Michael spent the past year headlining in his own show in Las Vegas. michael turco’s MAGIC & MAYHEM at planet hollywood casino. Turco has brought a little bit of Jersey to the strip. He has created new illusions specifically for this stage and collaborated with ABC’s Dancing With The Stars Pro Lacey Schwimmer to bring some fantastic cutting edge choreography to his show.

The press describes Turco as “a natural born talent... a true success story." 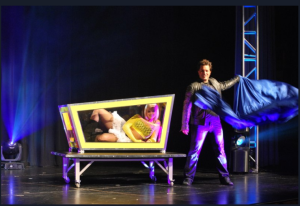