A professional entertainer for over thirty years, Dan's talents have taken him literally around the world performing in such exotic locations as Kuala Lumpur, Malaysia, Singapore, The Bahamas, Las Vegas, on Luxury Cruise Ships, in Revue Shows and Comedy Clubs throughout the US, TV Commercials and for many Fortune 500 Companies.

In addition to being a first rate performer for adults, Dan is considered to be one of the finest and most capable children's entertainers in the country. He is a familiar face to many, as Dan and his puppet pals have been seen regularly on children's television shows broadcast throughout the nation!

Dan , at the age of eight years, started to talk to himself. Not that that is unusual for a child of this age, but when he started to get responses, his parents became concerned. Being good parents, they sprang into action and, after finding out the cost of child psychiatry, sought a cheaper alternative and opted instead to give him a little ventriloquist dummy for Christmas that year.

By the time he was 11, Dan was a pro, complete with business cards and a little act, he performed at childrens' parties, banquets, fairs, etc. He charged five dollars a show. Now, some twenty-five+ years later, Dan is still talking to himself (only now, thank goodness, he's getting paid a lot more)!

Through the years, Dan has done it all - worked in Singapore, Malaysia, Las Vegas, on major cruise ships, in comedy clubs and for corporate events. Additionally, Dan and his puppet pals produce educational/entertainment programs for schools throughout the State of Florida which has garnered him high acclaim amongst educators

Sooo, if you need a great specialty act for a Vegas style Production or Variety Show, or a fun, after dinner show for that next corporate banquet, call Jps! Dan's cast of wacky characters has rocked many a room with laughter. Don't forget the kids - Dan has a special show just for them, loaded with funny friends, mysterious magic tricks and lots of laffs!

Adults, kids or family audiences, when you need a funny act that you can count on - call Dan Christopher and his "friends"... you'll be glad you did!

Shows for Family Audiences and Kidshows!

What do you get when you start with someWild and
Crazy Puppet Pals, add some Mysterious Magic Tricks
and some Funny Jokes that'll have 'em rolling in the
aisles? The answer is Dan ...and friends!
A fun-filled 45 minute show suitable for Family
Audiences with a special Kidshow version available
that will Delight very single member of the audience!

Combining talents in Ventriloquism, Puppetry, Magic
and Comedy makes Dan one of the most
sought-after Performing Artists in the area.
With so many years of on-stage experience (literally,
thousands of performances..), you can
rest assured that your group will be thoroughly
entertained by Dan and his wacky cast.
The show is completely self-contained. We carry
everything - props, costumes and portable sound system.
You just provide a place to perform and the audience! 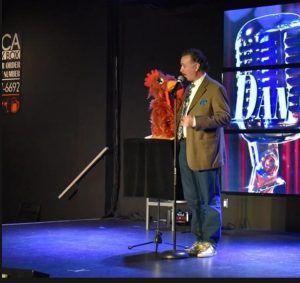