Yang, our Asian Acrobat, has performed with the Big Apple Circus and is the founder of the world-famous Nanjing Acrobatic Troupe in China.  As a child in Shanghai, he started learning acrobatics from a famous teacher, Pan Ying, who had many students. Pan Ying trained people for acrobatic troupes and for the opera. His father, who was a chef, wanted him to concentrate on the opera but he liked doing the funny parts.

So, by accident, he studied the acrobatics. Yang performed on the teeterboard and the swing, learned martial arts, juggling tridents and learned walking on a rolling globe. 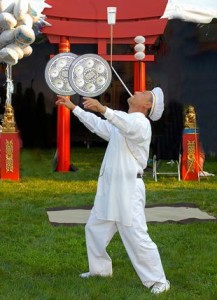