Close up shows Corporate and Private

There are a lot of ways to bring people to your booth, but only a trade show magician can attract crowds, deliver your message, and pre-qualify leads all while generating buzz and excitement.

His custom scripting will incorporate your products or services into my magic. Booth visitors will learn why they should do business with you.  Magic appeals to all ages and backgrounds. With a trade show magician, you don’t need a large booth to have a large presence on the trade show floor.

Perfect for cocktails and mixers, hospitality parties as well as any social gathering.  He can entertain person to person or in small groups and sessions.  Because of his unique and creative style of magic, Holiday guarantees your audiences will be not only entertained but amazed, mystified and always something NEW! 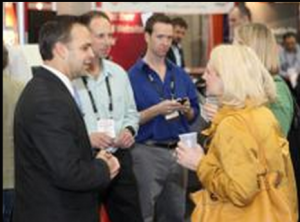 Holiday is an award winning magician who has been working in the entertainment industry for over twenty years. Making hundreds of performances yearly for thousands of audiences all over the world.  From Singapore and Seoul South Korea to the casino's of his hometown in Atlantic City, where Joe has been a featured performer at both the Trump Plaza and Showboat Casino Hotels.

Holiday has appeared on international television and was the featured guest star in Harary's multi-million dollar Illusion show "Mega Magic".  The summer long run was seen by over a million people throughout Asia.  Headlining on major cruise ships and appearing for corporate companies such as, KPMG, Bradley Caldwell Inc., The Trump Organization and Optaros Ecommerce solutions company.

Amusement Parks such as Fantasy Island in Beach Haven New Jersey, Kennywood Park in Pittsburgh Pennsylvania and Six Flags American in Largo Maryland have all repeatedly book Holiday for several seasons to entertain their guests with his “Family Friendly” approach to magic and comedy.

In 2009 he had the honor and privilege to make several performances in Seoul South Korea for our men and women stationed on US military bases overseas with his full Illusion show.

If you want a Close up Magician, Holiday delivers!