John H is the Yo-Yo Guy! He has performed his unique high energy comedy yo-yo show in 26 countries from New Zealand to Japan, holds the world yo-yo champion title and 4 Guinness World Records. He has been featured on David Letterman, the Discovery Channel's Time Warp, Comedy Central, the Guinness World Record Show, Fetch with Ruff Ruffman on PBS, and even has his own Topps trading card! ESPN magazine coined him "Unsung Hero" of 2008. The Yo-Yo Guy is an interactive performance with yo-yos, unicycle, and a giant yo-yo that John walks on! Specializing in family shows, this show is great for all ages! 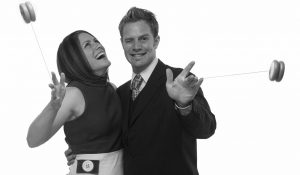